By Sanjeev Ramachandran
20431 Views
Posted In
Sports
Tagged as
Related

Australia yet again thrived on a captain’s innings with ample support offered from down the order. Ending their innings at a massive score of 530, the home team now leads the visitors by 422 runs at the end of the second day at Melbourne. 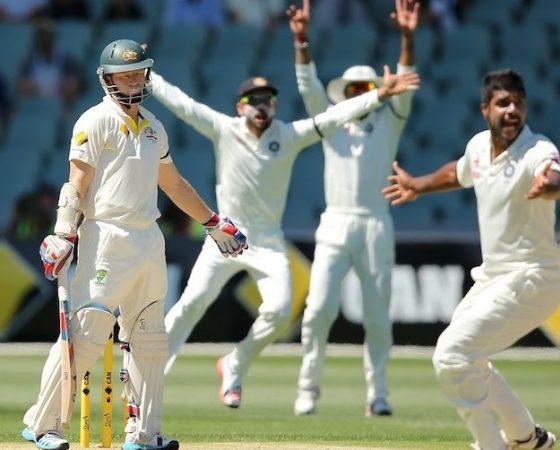 Resuming their innings from 259/5 from day one, the Australian innings was steered with sheer excellence by skipper Steven Smith, who registered his third century in the series with an outstanding innings of 192 runs.

Mohammed Shami brought the initial breakthrough for the visitors in second day with the dismissal of Brad Haddin (55). See the scorecard here.

However, India yet again struggled to wrap up the Australian innings convincingly as Mitchell Johnson (28) and Ryan Harris (74) came up with adequate support for the skipper.

The Australian innings ended at 530 with the wicket of Steven Smith being the last to fall. His endeavor till the very last delivery of the innings was acknowledged by a standing ovation from all parts of the ground.

Trailing their opponents by 530 runs, the visitors did manage to put up a fight before the day ended. India reached a score of 108 for the loss of a single wicket while at stumps. Ryan Harris pocketed the sole wicket for the home team in the second day by dismissing Shikhar Dhawan at 28.

Murali Vijay, the centurion at Brisbane, carried over his good run and is standing at the crease with 55 runs bagged against his name. India will resume the innings tomorrow with him and Cheteswar Pujara (28), who is yet to make a solid score after the first innings knock of 73 runs at Adelaide.