It seems that Snapdeal loves to enjoy its stardom. In lesser than a month’s case of messed up IPhone delivery by them in Pune similar incident happened again. This time part of the mess was somebody from the capital city. 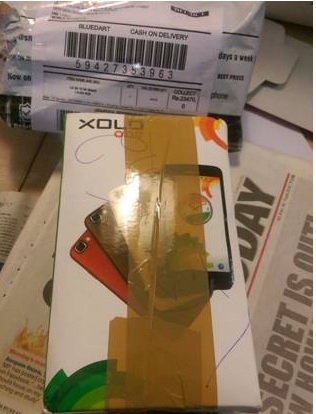 Guatam Sachdeva a resident of Delhi ordered a LG smart phone from Snapdeal on Dec 24, 2014(Christmas Eve) as a gift for his father however the surprise turned into shock for him. The gift wrapped box had a second had phone from some random phone seller delivered at his place.

Thankfully Guatam ordered the phone with cash on delivery benefit and took the money back sooner he discovered the mess. Sharing his experience with TOI Gautam said he feels cheated and because of Snapdeal his new year’s surprise present for his father was spoilt.

He blamed the company for not verifying the details of their seller and allowing people to connect randomly.

These mistakes can cause serious damage to the reputation of the company and needs to instantly taken care off by the company.

Snapdeal has been facing these kind of issues because of not having its own supply chain and logistics and been relying completely on third party delivery system.

In the last incident reported against Snapdeal they accidently delivered pieces of wood to a consumer who ordered an IPhone in Pune, This is not all several incidents of delivering bricks and packet of Vim soap has also been reported so far.

They may easily lose their market grip if something is not done swiftly and measures are not taken to control these kinds of activities.

Air India server hacked, 45 lakh passenger’ emails, passwords leaked online
About S Ranjita 187 Articles
Ranjita is a seasoned writer on a variety of topics. She has been writing for 8 years now on various international publications. Entertainment and current news topics are her favorite. She can be reached at [email protected]