Changi Airport, on June 27, 2016, witnessed some dramatic events, as a Singapore Jet was caught on fire after making an emergency landing.

More than 240 passengers including the cabin crew had a narrow escape, and according to official updates, no casualties have been reported.

The Flight SQ 368 started its course from Singapore to Milan on 02.05 AM. Within two hours, pilot reported problems in the engine and requested for an immediate landing at the Changi. 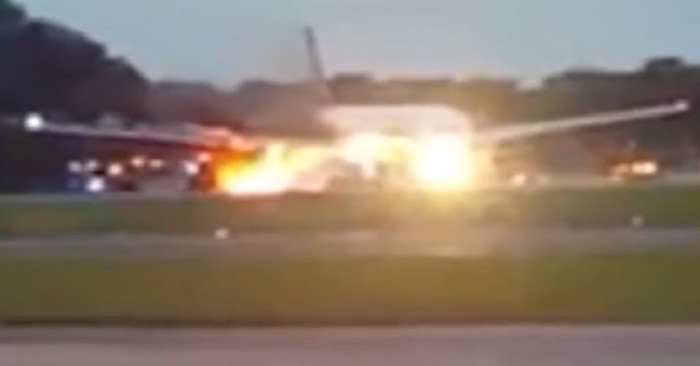 SIA, in a recently issued statement, told that it is the engine oil warning message which compelled them for an emergency landing.

The statement added that the right engine of the aircraft caught fire soon after the landing. Airport authorities took quick action, and they succeeded in putting out the fire within no time.

After evacuation, passengers were transported to the terminal building by bus.

A statement issued by Changi airport claims that the fire was brought under control within minuted by the airport security authorities. The Emergency Service Team was already on standby, and it helped a lot to combat a possible tragedy.

In the meantime, a passenger on the flight has posted a video in Facebook which portrays the plane getting caught in the fire. The video is now slowly becoming viral on social media sites.

The video clip was shot from a window seat, and it clearly shows the right engine getting dipped in huge flames and smoke. Lee Bee Yee, the Facebook user who posted the clip captioned it “I just escaped from death”.

Lee also added that firefighters reached near the plane within minutes, and they sprayed foam and water on the plane to put out the flames.

Missing Malaysian plane confirmed to be crashed in Indian Ocean
About Parasshuram Shalgar 173 Articles
A well-versed news editor for over 14 years now, Mr Shalgar’s articles have been circulated to well over 60+ million visitors.