The former Jammu and Kashmir chief minister and the president of People’s Democratic Party (PDP) Mehbooba Mufti tweeted on Wednesday, September 29, 2021, that she was again put under house arrest over the plans to visit a village in Tral which was allegedly “robbed by the army”. 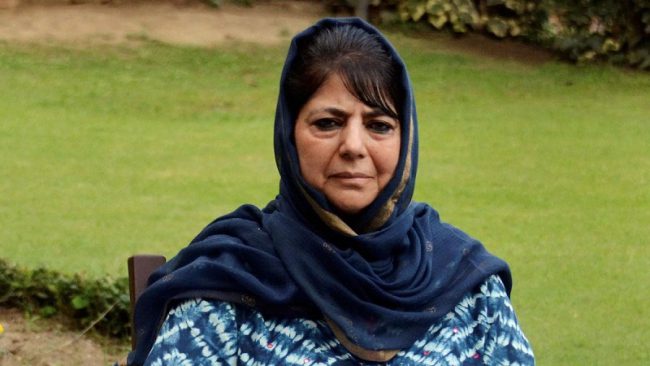 She said this is the real picture of Kashmir and this should be shown to the visiting dignitaries instead of the guided ones. She took this to Twitter saying that she is locked up in her own house.

Locked up in my house today yet again for attempting to visit the village in Tral allegedly ransacked by army. This is the real picture of Kashmir that visiting dignitaries must be shown instead of GOIs sanitised & guided picnic tours. pic.twitter.com/Hp9wcuw1qT

She has also posted a picture of a vehicle, which looked like it belongs to the security forces, and it was blocking the main gate of her residence on the Gupkar road.

On Tuesday, the PDP chief had said that the Army personnel had thrashed a family and robbed the homes in Trial. The daughter of the family had undergone some serious injuries in this attack and was getting treatment at a hospital. She also added that she would meet her kin.

She took this to the microblogging site and wrote that the Army from Yagwani camp in Tral village has ransacked homes and had ruthlessly thrashed a family the preceding night. This is not the first time when the civilians from this village have been beaten up by the army.

The former chief minister had been detained for more than a year after the Narendra Modi-led central government decided to abrogate Article 370 that has granted a special status to the state of Jammu and Kashmir. As per an official, she was later dictated under the Public Safety Act (PSA).

At that time, almost all the political leaders in the Valley, including President of National Conference’s Farooq Abdullah, his son Omar Abdullah and People’s Conference leader Sajjad Lone, were arrest as the Centre removed the special status of the Jammu and Kashmir and forked it into two Union territories.

< Previous Article
‘COVID-19’ to remain with us for over the next 10 years, says ‘Ugur Sahin’ CEO of BioNTech
Next Article >
LAWDA trending on Twitter; Dal Lake cleanliness drive in full swing in Srinagar
About the Author
Priyanka Pandey