A residential building in New York city’s East Harlem neighborhood is reported to have exploded and collapsed on Wednesday. The area has been engulfed in thick smoke after after a serious fire was sparked in the explosion. 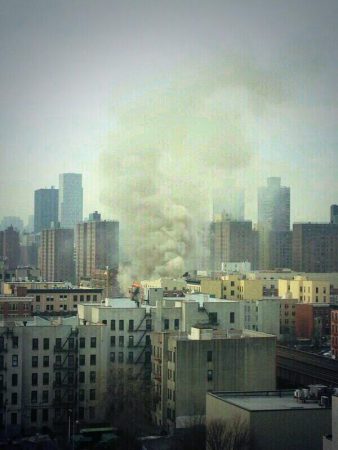 At least two women were killed and 18 people were injured in the accident. A resident in a nearby building had reportedly smelt gas shortly before the blast. Some people who fled for safety are still missing. Even groceries were knocked off the shelves in nearby stores.

A police spokesman said that the call came at 9:34 am and the New York Fire Department is in the process of extinguishing the fire. They refused to give any information on casualties but other reports emerged of some injured people between 4 and 11.

TV stations were reporting that many people had sustained minor injuries at the 116th Street and Park Avenue in the incident. The images showed smoke and dust from the debris with fire engines trying to extinguish the fire in the rubble.

Trains in the nearby metro north were stopped and passengers were ordered to get off the rail cars in the Bronx at the Fordham stop.