By Sanjeev Ramachandran
1592 Views
Posted In
Sports
Tagged as
Related

India won the toss and elected to bat first against Australia in the second match of the Carlton Mid ODI tri-nation series. 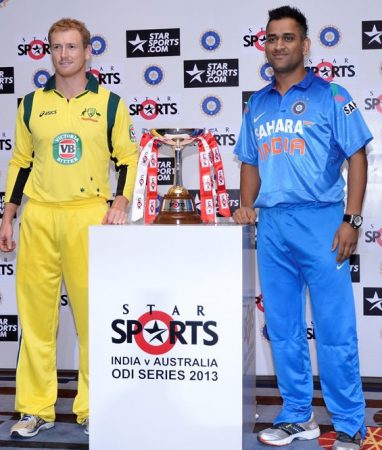 With fair advantages mounted on their back, Australia will be eyeing to hold to the winning momentum in the series after thrashing England in the opening game.

While the defending World Cup champions may also not be giving up the efforts and will be all in to smoothen their journey on the road to the World Cup. Follow the live scores here.

The two teams have been on an excellent run in their previous campaigns and prediction of any result would only seem meticulous, although with the home team having a greater momentum over their opponents.

The 2-0 win against India by the home team may have slightly demoralized the Indian squad. But with new sights, the Indian squad should be carrying over their run in the colored jerseys and not from the one in the five-day format.

Having sealed their previous three ODI outings, of those against England, West Indies and Sri Lanka, skipper MS Dhoni has now given a full-fledged mind to India’s World Cup campaign.

Viewers in India can watch the live telecast of the match on Star Sports Tv Channel. Star Sports will also be live streaming the match at its official website here.

But his young squad may have a real test on Australian soil, which would be commencing right from tomorrow’s game. India would be getting on to the field with the absence of Ishant Sharma, Ravindra Jadeja and Bhuvneshwar Kumar.

Mohit Sharma and Dhawan Kulkarni have been called in for the ODI series as in case of any replacements required and
it seems like they would be demanding it tomorrow, which in turn would be going against their World Cup preparations.

Confusions prevail for the skipper even over the opening pair. With Ajinkya Rahane doing his job in the absence of Rohit Sharma, it would be hard decision for Dhoni to pick up the opening pair among the two and Shikhar Dhawan.

But he would be determined not to move forward with any experiments as he has ascertained that the word experiment has not been the one India has been relying on since 2007.

Australia is also bothered with similar worries. Absence of Michael Clarke and Mitchell Marsh have forced for the inclusion of Gurinder Sandhu and Kane Richardson.

Skipper George Bailey would be hoping that the fine run of David Warner would be carried forward, as early strikes may well bring the unrest among the young bowlers.

But, changes can be expected in the batting line-up as Australia was yet again close to a middle order collapse in their game against England, the one that has been haunting the squad for a long time despite their good run.