The veteran cartoonist R K Laxman passed away on the eve of January 26, 2015 at Dinanath Mangeshkar hospital in Pune.

He was known to be genius at work and has brought smiles to millions of people every day with his cartoons. Laxman was on life support system from last few days and finally passed away at the age of 93 signing his final good bye to the industry. 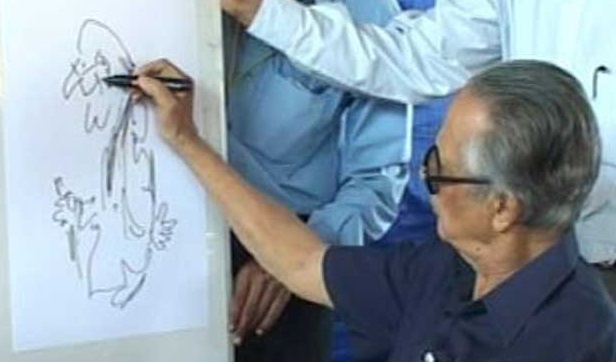 Laxman was born in 1921 in Mysore and had no formal training of his profession. He was driven by passion and started drawing illustrations for local newspaper, story books and novels of his famous novelist and elder brother R K Narayan.

He came to Mumbai in 1940 and started his illustrious career at Times group from 1947 till end. R K Laxman won many awards for his work which includes some of the most prestigious ones like Padma Bhushan, Padma Vibhushan and Magsaysay Award.

Laxman worked for Times group till 2010 and never carried away his enthusiasm towards life and his career. Even after suffering from strokes in 2003, 2010 followed by paralysis he never went down.

He continued to draw the cartoons till the end of his life. His last few years of life were spent in Pune and he finally passed away due to multi organ failure.

He was admitted in hospital in the middle of January due to the complication of throat infection however it severed with time and the problem worsened to the cost of loss of his life.

10 COBRA commandos killed in an IED explosion in Aurangabad Jungles

Russian foreign minister Sergey Lavrov’s high profile visit puts India under pressure
About Nitish shaw 60 Articles
An aspiring novelist and a random blogger, Nitish is also a porky-mouthed banter specialist when it comes to football (soccer), films, TV Series, History and socio-economic issues. He travels, indulges in music and plays outdoor sports to get his creative juices flowing. “There’s the scarlet thread of murder running through the colorless skein of life, and our duty is to unravel it, and isolate it, and expose every inch of it.”- Quote this, and you will be his favorite person for at least as long as the two of you can hold up the conversation.