NASA’s Mars rover is in no mood to stay idle. After the period of recess for its software upgradation, Curiosity has now returned to its own self by resuming its inspection works in the lower layers of Mount Sharp in Mars.

Curiosity is currently drilling its sample from Mojave2, which would be the fifth sample it would be letting in for an on-board inspection. 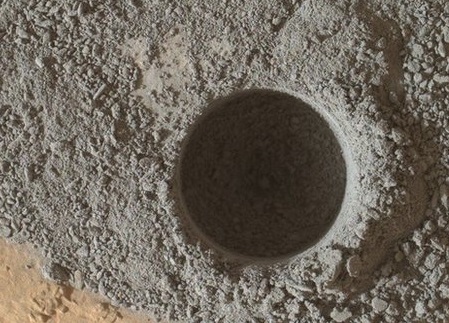 The location at Gale Crater is being inspected for detecting the left-over salt minerals after an evaporation of lake water.  It’s the same location where Curiosity made its landing back in 2012.

Earlier, while carrying out a similar task, Curiosity ended up chopping the nearby slabs.  However, the location at Mojave 2 is expected to offer the stable rock required to drill down the 6cm test-hole for acquiring the sample piece.

Launched with a prime aim of detecting the life support in Martian conditions, Curiosity has handed over some remarkable findings throughout its two year long journey.

Recent one among those includes the discovery of methane and other complex carbon compounds across the Gale Crater.

It was only weeks ago that Curiosity has explained how the mountains in that region got formed with the deposition of lake sediments billions of years ago; following which the NASA robot has been kept engaged to inspect the salt minerals left behind.

Solar Eclipse December 2021: Know what this brings for your zodiac signs!

Nasa Hires Theologians To Know The Religious Take On Alien Life!
About Sanjeev Ramachandran 147 Articles
Sanjeev Ramachandran has found ultimate joy all through his 23-year-long journalism career by writing for national and international newspapers, websites and blogs. From technology to politics to sports to entertainment, he has been able to express ideas and pen opinion pieces on whatever triggers his interest. Currently at the helm of his own content and public relations company, called Siyahi – The Content & PR People, he makes sure that he doesn’t always let administrative tasks take over his writing space.